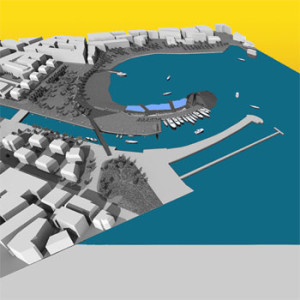 ARTIFICE / NATURE
The project proposal foresees the realization of a new pier that integrates inside it parking and boat storage; bathing establishments, swimming pools, support equipment and the Congress Center. Part of the square will be used for the weekly market. The new design of the bridge over the Boate, establishes a continuity between the different areas of the waterfront.
GAME OF RELATIONSHIPS
Attractions are determined on the new pier with the structure of the Congress Center, pleasure moorings, seawater swimming pools; and also inside, on the site of the ex-Cinema with an exhibition space, and the redesign of the pedestrian bridge.
VIABILITY AND PARKING
For pedestrians, a wide limited traffic zone is proposed. The strengthening of collective transport can be obtained by intervening on the bus system, while for private transport the aim is the elimination of east-west crossing traffic and the realization of a new vehicular bridge. In this way, a route outside the area delimited by the railway line is realized. The parking lots foreseen by the project proposal are parking molo-integrone, parking ex cinema Italia.
THE INTEGRONE
The idea is to integrate a series of functions in a single structure (a system of cabins / dressing rooms and services; salt water pools; solarium) the image is that of a large rock.
THE CONFERENCE CENTER
The Conference Center includes a conference room on two levels, an additional independent room, foyer, desktop, checkroom, bar, two stairwells and two elevators. The roof is partly practicable and ends with a belvedere point characterized by a system of steps facing the sea.
THE SEA PROMENADE
The promenade is re-delineated with a flight of steps facing the new floating stage and new terraces punctuated by small volumes. The collective space from Piazza IV Novembre to the new Pier-Congress Center finds a break in the pinewood annexed to the coast. 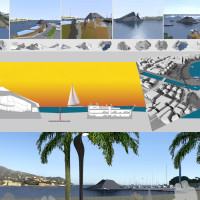 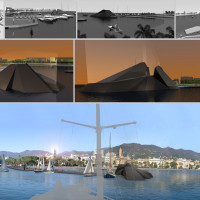