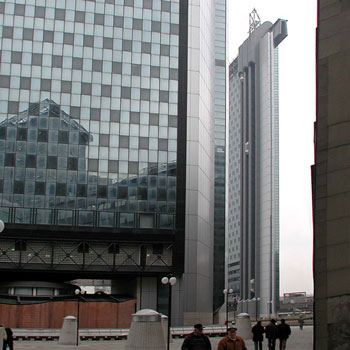 The assignment of CTIP spa, ENEL concessionaire, requires the design of the headquarters of the public company (operational and directional offices, exhibition and conference halls, canteen, computer center, etc..) in two identical buildings in the outermost area of the center ending the main axis to the west on pizza Salerno. Between 1986 and 1990 the project was drawn up and followed by immediate realization. Inserted in the master plan of Kenzo Tange, in binding to its general prescriptions that in the indicated lots foresee plants in the shape of parellelogramma with very limited depth, the main choice is to rotate these shapes of 45° in respect to the original position in order to open the volumes to the city.

In this way, a sort of modern civic door is created – even more exalted by the preliminary idea, not accepted, of connecting the two buildings by means of an aerial walkway – which mediates the connection with the existing urban fabric and emphasizes the access to the directional citadel. With three-dimensional tapered terminals, it develops into twin towers, slender “cutting” blades about 110 m high with 33 floors suspended by cables and binders from a powerful steel beam on the roof resting on triangular reinforced concrete heads. In order to make full use of the rectangular surface of the central office area, the vertical connection systems, characterized by panoramic elevators channelled into sturdy external “guides”, and toilets are located in these oblique geometry extremities, while the fourth and last levels are destined to the technical systems, the technological and distributive solution adopted allows the maximum exploitation of the reduced dimensions giving also the opportunity to work the mass through the insertion of volumes released from the perimeter limit as the exhibition and conference rooms placed in suspended spatiality and the articulated entrances on three levels in order to connect to the different quotas of underground vehicular and pedestrian access.

Then there is the articulated ground connection. In rooting the building to the ground, it plastically models the basement area in the large atrium partially detached from the upper floors in order to create a passing void that digs the overall thickness of the building. A soft serpentine of red bricks defines the appearance of the building, a coloristic counterpoint to the overall dark gray, black and green tones on the back side and a crooked volume covered with glass, where the pedestrian entrances open, on the main front. Modulated in an alternation of opaque and reflective glass, the façade panels in the office area create a variegated curtain wall, connected at the bottom to the truss of the technical floor left in view. Another treatment distinguishes the triangular heads covered with aluminium alucobond sheets. 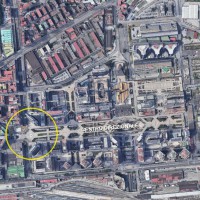 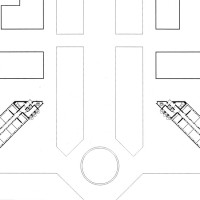 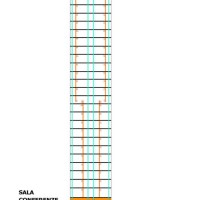 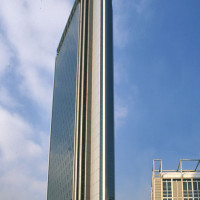 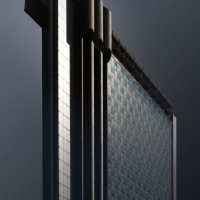 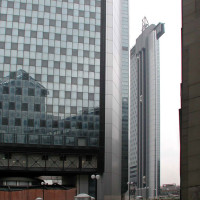 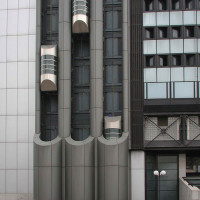 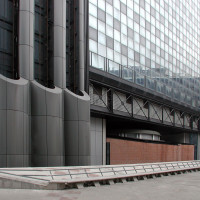 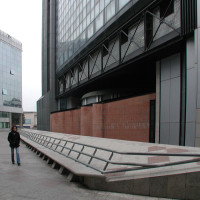 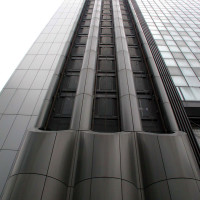 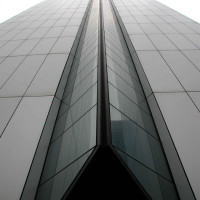