The road is the link between people and the land.
It is not only an infrastructure
but a space to be managed in such a way that everyone can find their own balance.

Via XX Settembre is a significant axis of Genoa, which supports the consolidated nineteenth-century part of the city, from Piazza De Ferrari to the intersection with Via Fiume; born as a link between the center and the new residential areas to the east, it becomes an expression of a new industrial and entrepreneurial bourgeoisie and is officially defined, in 1889, a “grand artery road for which from Piazza De Ferrari you can reach the view to Piazza Tommaseo”.
In reality, it is the road towards which, at the beginning of the last century, the urban center of gravity was moving, the widest in the city, a straight road about 800 meters long that continues visually and in terms of traffic towards the current Corso Buenos Aires up to the foot of the Albaro hill. It is the only street with arcades and is considered by the city as a connecting artery and an elegant street reserved for strolling and social gatherings.
With the transformations foreseen by the competition, Via XX Settembre will change its role in the city:
– much less a connecting artery and in any case reserved only for public transport
– much more a street for strolling and social gathering, certainly elegant, available to all,
characterized by a comprehensible relationship between the elements structuring the intervention and those of the context: transformations aware of having to become part of larger ensembles by privileging environmental aspects, urban landscape, stratifications and memory of places. 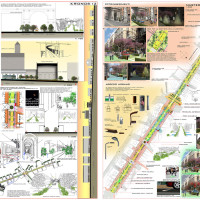