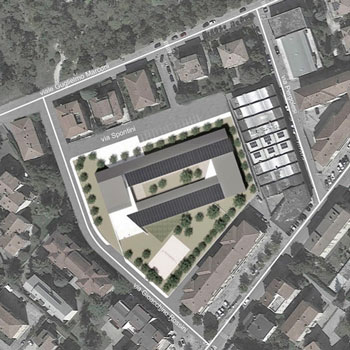 The intervention area is located in the centre of Matelica, on flat land, bordered on the west by Via Rossini and on the north by Via Spontini, on the other sides by multi-storey residential buildings, on the north side a series of houses with access from Via Spontini from which it is possible to reach Via Marconi and the municipal gardens; it is located in a residential context with buildings with pitched roofs.
The architectural solution proposed for the new school complex is a courtyard building running parallel to Via Spontini, with two floors above ground on the north side and one on the south side, in order to increase the illumination of the courtyard and the visual relationship from the first floor to the park on the south side, allowing the glass front of the classrooms to be oriented to the south. The existing building is incorporated, while the roofs of the new building with pitched roofs are in keeping with the local construction style; the covered area is less than 50% of the Sf. The building finds in its courtyard a green, ecological/educational space, conceived as a real “open-air classroom”, around which all the school’s activities revolve, allowing the largest number of classrooms to be located on the ground floor.
The compact front to the west, strongly representative on an urban scale, is characterised by the single-pitch roof that ends on the steps facing south on the green and open-air play area, which can be used not only for leisure time but also as an open-air theatre for performances/events.
To the south of the lot, the area designated as a park is also structured for sports activities, where the trees are maintained and integrated, identifying spaces to be equipped with street furniture to open up to the neighbourhood. 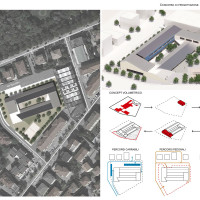 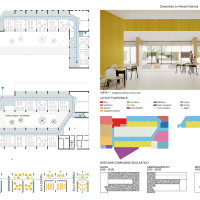 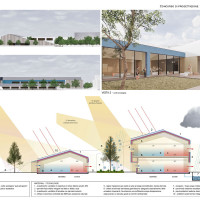