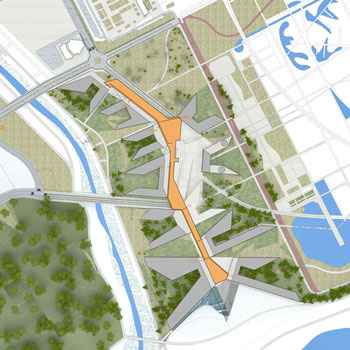 DISTICTION / INTEGRATION
Spatial integration with the context and spatial strategy differentiation for a recognizable identity, are the first goals of the proposal for the Museum Complex.
Project site is prevalently encircled by green area: Central Park from eastern side, waterfront parks alongside the Geum River and the Che Creek from the Southern and western side. From the north side the green prevails on buildings too (City Promotion Hall of Korea and the scheduled Arts high school).
For these reasons, the project proposal tends to confirm the “green” image for the site with many permeable surfaces and roof gardens at the top of the buildings.
To gain this result, the buildings and the ground are continuous, so creating a complex soil modelling that give a clear identity to the entire site and to all public spaces. The spatial integration is also confirmed in the Vehicular accesses and passages with parking lots located under the pedestrian paths and squares towards which converge pedestrian access to the area.
CONNECTIVITY
The centrality ascribed to public and pedestrian areas and the integration with the context confirms the importance of this new Cultural platform “Embracing Human, Culture, and Nature”. The distinction between each museum activity is clearly identifies by the roofs at different heights and the passage into each one by the principal pedestrian axis takes visitors directly into each museum. In fact all the main entrances to the museums and the facilities are located along the central
axis where converge the pedestrian and cycle paths to and from the project area. The central path (N/S oriented) guarantees the connection with the surrounding facilities where, all the pedestrian paths from east (Central Park) and pedestrian/ vehicular bridges at the west side, converges.
EXPANDABILITY
The project solution based on the central axis makes the future expansion possible in the phased development plan. The first phase of the project realize the requested facilities in the north side, near the Urban Symbol Square and in continuity with its direction. The second phase can complete the landscape design with the river frontage that realize a new extraordinary public space also with the particular position of the Museum of Natural history. 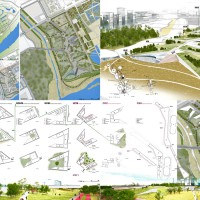 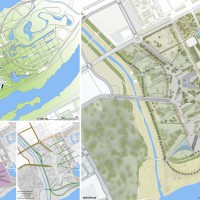 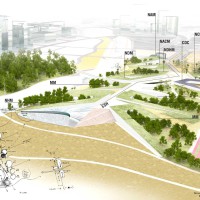 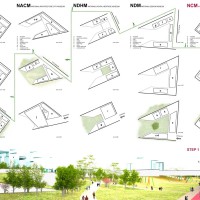 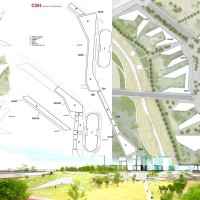