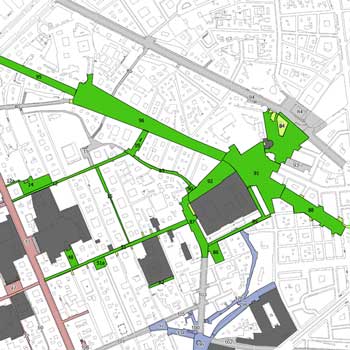 The Great Program for the enhancement of the historic center of Naples – UNESCO site – has been built following a methodology that aims to coordinate and integrate the needs of protection and enhancement that are present in the rationale of the UNESCO World Heritage Sites.

The general aim is to strengthen both the internal interconnections of the structure and those with the rest of the city (transport systems, tourist routes and monumental poles) as well as to rationalize the system of primary infrastructure networks (sewers, public lighting, etc.).

1 – Streets and squares it is expected an intervention generally marked by the recovery of the ancient pavements, almost totally in paving stones, and the related warping, in order to preserve the trace of the past.
2 – improvement of the liveability for the inhabitants and the tourist reception, giving more emphasis to the pedestrianization in the recently established limited traffic zone, trying to extend it as much as possible, but also ensuring the possibility of parking in the outer areas.
3 – improvement of accessibility, minimizing the impact of new travel systems by favoring the concept of minimum intervention with solutions as much as possible inspired by the logic of Design for all.

In general, in the project are used all the information already present in the built, provided for example by the continuous building curtains, as well as materials compatible with the original ones, reducing the application of LOGES systems where strictly necessary or on new pavings. In particular, the whole axis of via Tribunali has been considered a sample site of good practices, with the identification of a path with extended usability, extended to all visitors, tourists and residents, with the added value of being tactile for the visually impaired and safer and easier for people with motor disabilities.
The administration has made its own the contributions arising from the conventions entered into with the DIARC (Department of Architecture of the University Federico II of Naples) and CROASP (Center for Operational Research on Accessibility of Public Spaces) on the guidelines for accessibility of the historic center Unesco.

All the furnishing elements indicated in the graphic elaborations have therefore been adapted to the criteria and to the design solutions provided to us regarding the expanded usability, and can also be integrated or replaced with the suggested typologies. 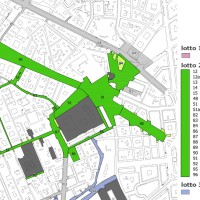